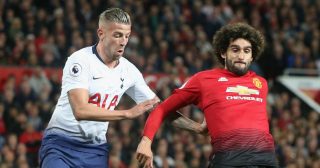 Tottenham defender Toby Alderweireld has been heavily linked with a move to Manchester United and he admits he is no closer to penning fresh terms in north London.

This revelation is likely to have United believing that they can still strike a deal for one of their prime defensive targets from the past summer.

The Belgium international is set to see his current agreement expire at the end of the season. Then he will be available on a free transfer!

However, Spurs have the option to take up a 12-month extension, but activating that clause will also trigger a £25 million buyout option for the 29-year-old’s potential suitors. One definitely being United.

There has been no progress in talks between Spurs and Alderweireld, so the defender was quizzed by Sky Sports on whether he can provide an update on discussions.

He said: “Not that I can say, no. I’m focused on Spurs and trying to help the team. That’s all I can do.”

It goes without saying that Toby would make a big difference at United when most weeks we see Chris Smalling start games in the heart of the defence. It’s also only a matter of time before we see more of Phil Jones, albeit not taking penalties or corners.