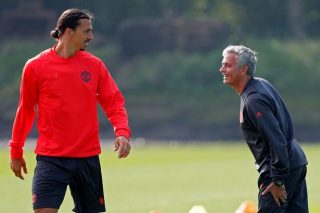 United have endured a difficult start to the season, losing three of our opening eight league games and being dumped out of the League Cup after losing to Championship side Derby County on penalties.

READ MORE: Jesse Lingard in line for new and improved contract in 2019

Mourinho under intense pressure, with his side under-performing and currently carrying a negative goal difference.

The manager is due to meet with United’s vice executive-chairman Ed Woodward is London this week for further showdown talks, with his long-term future far from secure at Old Trafford.

However Ibrahimovic, who scored 28 goals in Mourinho’s debut season in charge at United, fees that parting ways with the Portuguese would be foolish.

The Swede has called on United’s players to take more responsibility, stating Mourinho can’t perform “miracles” if his starts aren’t at their best.

“I think he has the ability to win [the Premier League]” said Zlatan, speaking to BetHard. “I think he is the right coach for that club, for that team

“But a coach is only as good as his team, so it’s not like he can do miracles if the team is not good enough.

“And I feel the team is good – it’s progressing, becoming better. This is his third year, the players know more and more the way he wants to play and how he wants it – so I believe, yes.”

Ibrahimovic is very much a Mourinho man and the issues are United are very much a collective.

Mourinho is not blameless and nor are the players, Woodward or the Glazers.

If the manager is looking to get the most out of his players, he should pick fewer battles with his more talented stars and they might actually respond in games rather than prance around the pitch looking like they’d rather be elsewhere.