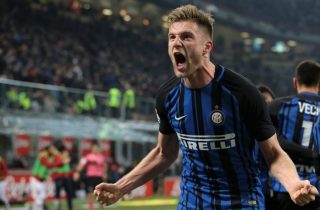 Inter Milan defender Milan Skriniar has opened up about his future amid the latest round of speculation surrounding him.

According to ESPN’s Rob Dawson, Skriniar is at the top of Jose Mourinho’s wish list to bolster United’s defence.

Meanwhile, TeamTalk claim Skriniar is negotiating a new contract with Inter, despite Italian newspaper La Gazzetta dello Sport claiming back in June that United had offered £57 million for the centre-back in an attempt to lure Inter into a summer sale, but the Serie A giants wanted £70 million.

The 23-year-old, who has always stated his desire to stay with Inter, is under contract until 2022.

Football Italia have also ran a story citing reports from Tuttosport suggesting Bayern Munich’s board want to take the Slovakia international to Germany.

“I just read about these things, but I do not think about it. There were rumours during the summer but in the end, nothing happened and I do not think it is happening now,” Skriniar said, as per Calciomercato.

“We have a lot of matches with Inter. Right after the national team, there is an important challenge against Milan in the derby, we have to prepare well.

“Juventus are leading in Italy, but we can also play against them. We are where we wanted to be from the start of the season and we will try to continue like this with this series of results for as long as possible.”

Skriniar would be a welcome addition to our defence if United can flog off the likes of Chris Smalling and Phil Jones, who, for years, have clearly not been good enough.

His aggression would go down well with United fans too, but it remains to be seen after our difficult start to the season whether Mourinho will settle for one new defender. The manager may demand more.