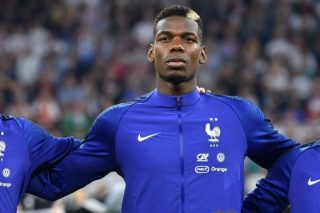 Paul Pogba has sat down with French daily Le Figaro this week whilst away on international duty following France’s success at the 2018 World Cup.

The Manchester United midfielder opened up on a range of issues in the interview, including his ambitions on the pitch and fatherhood.

Much has also been made in recent times about Pogba’s position at United – whether or not he will be at the club next year.

While Pogba shied away from opening up about his problematic relationship with manager Jose Mourinho, which Didier Deschamps has said is exaggerated, the player has revealed his Premier League objectives.

Pogba told the paper “I’m not satisfied, I’m still very hungry” after winning the World Cup. He then listed his current targets:

“The Premier League, the Champions League, the Euros, and to be one of the best players in the world.

“I want to be a mark in the history of football. I need to be even more decisive, to score more goals.”

Pogba has also been quizzed this week about who he thinks should win the 2018 Ballon d’Or. He immediately rules himself out of the runner and admits to nominating four of his French international teammates.

“Whether it’s Grizou (Griezmann), Kylian (Mbappe) or Raph’ (Varane), they deserve it much more than me.

“I can not designate one. But I hope with all my heart that this is one of the three.

“One of the four also because there is NG (Kante). That’s all I hope for anyway, because there are many who deserve it. I do not put myself in.”

In the more important news, Pogba tells Le Figaro that he’s ready to become a father.

“I want to start a family, to have children. I want a large family but I also know that having a baby is a privilege because there are people who struggle to have one.

“If I have one, it will be a gift from God. After that I’d like two, three, four, five. I am a taker, children are the future, (they are) life.”