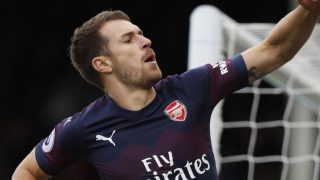 The Evening Standard believes Manchester United and Liverpool are weighing up a cut-price January move for Arsenal midfielder Aaron Ramsey.

Talks between the Gunners and the 27-year-old broke down last month after the club withdrew a contract offer which had been on the table for several months.

Ramsey, whose deal expires at the end of the season, is free to negotiate with overseas teams from January but the Standard claims there is interest from Arsenal’s Premier League rivals, which will make for interesting dealings between now and February at least.

In regards to clubs overseas, AC Milan, Inter and Juventus are said to monitoring Ramsey’s situation. The English publication states, however, that Ramsey would prefer to stay in England, with his family settled in London and his wife shortly due to give birth to twins.

United tried to sign Ramsey when he left Cardiff for Arsenal in 2008. The club thought it was a done deal by going the distance and publishing a story on the official website, as per The Express.

The Standard also states that Liverpool are the most likely candidates, given Jurgen Klopp is a keen admirer of Ramsey and wants to strengthen his midfielder after missing out on Nabil Fekir from Lyon.

This is the last thing a new manager wants to be dealing with, so I’d imagine Unai Emery will want everything sorted as soon as possible and without any drama.

The Frenchman will be aiming to raise funds to continue rebuilding his squad and so the chance to recoup some money for Ramsey would appeal as he looks at alternatives.

United signed Fred from Shakhtar Donetsk for £52 million in the summer but have struggled badly for creativity in a difficult campaign for Jose Mourinho, but it hardly helps that the Brazilian is benched most weeks.

As stated above, the Standard, who run this story as an exclusive, believe Liverpool are the frontrunners in this race.