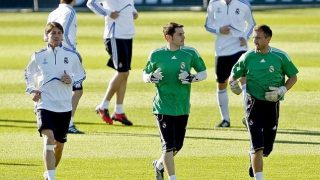 Jerzy Dudek played under Jose Mourinho at Real Madrid and has hailed the talent of the Portuguese coach in rallying his players.

The former Liverpool goalkeeper considers Mourinho as one of the finest psychologists working in football, citing his reaction to one of Real Madrid’s worst ever defeats as evidence.

READ MORE: Why Ed Woodward has been a disaster for Man Utd

Dudek was on the bench for one of the greatest humiliations ever inflicted on Los Blancos.

In 2010, Barcelona brought an end to Real Madrid’s perfect start to the season by hammering them 5-0. Sergio Ramos was sent off in the final moments and Dudek recalls the aftermath, insisting that Mourinho delivered a masterclass in the dressing room.

“After the match in the locker room, there was total chaos,” Dudek said, per AS.

“Then Mourinho came in. He knew how bad it was, but he looked at us and said: ‘I know this hurts you. Perhaps for most of you, it is the worst loss of your entire career. They are happy now and seem to have won the championship, but they have only won one game. This is just the beginning.

“‘There is still a long way to get the title. Tomorrow, I will give you the day off, but do not stay in your houses. Go with your families, children or friends for a walk around the city. Let people see that you can overcome this. Perhaps people talk about the significance of this defeat but do not hide behind it. You must show your balls. After this defeat, we must fight for the title’.

“We rose after this disaster quicker than anyone expected. I understood for the first time how important psychology was in sport. How much you can gain or lose. And what an expert psychologist Jose Mourinho is.”

Real Madrid ended up finishing second that season behind Barcelona, but won the league the following season, amassing 100 goals.

It would take some doing to get such a response from this United side, who can’t be arsed to show up most weeks.

Dudek, however, was clearly a fan of Mourinho. Iker Casillas would have a very different story.