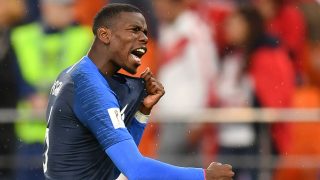 Pogba has been the focus of attention alongside Jose Mourinho at Manchester United after a spat between the pair was made public.

Cameras caught an awkward exchange between the two in training last month and Pogba’s vice-captaincy role has been stripped from the player.

His performances on the pitch haven’t been consistent enough and an under-fire Mourinho needs his best players to stand up and rally behind him. However, Pogba did show signs of doing that last weekend against Newcastle, when he played parts of the second half at centre-back and did really well as United forced a comeback from 2-0 down to claim all three points.

Former Arsenal ace Pires believes the 25-year-old needs to do his talking on the pitch and we couldn’t imagine Mourinho disagreeing with that.

“For Paul Pogba, the best is to say nothing. He’s a great player,” said Pires, as per TeamTalk. “If Man Utd paid a lot of money for him, it’s because he’s a good player.

“His relation with the manager may not be so good but he’s a professional. It’s very important for him to be focused on Man United, on the pitch.

“Now say nothing, play football and walk out — that’s my advice for Paul Pogba.”

Pires, 44, also believes Pogba’s team of World Cup winners were not as good as the side he was part of that won the World Cup 20 years before in 1998. Controversial but many will agree.

“Sorry, no the current team was not better than us,” he added. “The 1998 team was much better.

“We played with Zinedine Zidane and Youri Djorkaeff, the quality was very, very good.”

Now, we will see if this French side can push on under Deschamps and dominate international football some more by doing it in the European Championships. And, again in the next World Cup.