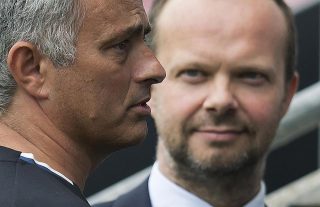 United fans have never been dumb – or shy – when it comes to our club’s decision makers. From the hard times put upon Martin Edwards, to the protests against BSkyB’s attempted take over, via the green and gold scarves protest against the Glazers ownership. On Saturday, the stadium spoke again: it started early in the second half with a forlorn and feeble United 0-2 down. Jose Mourinho was not the target from a corner of the Stretty: “Jose’s right, the board are sh*te”.

The song continued sporadically throughout the action and there were more chants about Ed Woodward. An impassioned speech by G-Nev on Sky had helped to articulate what many were already feeling. Forget whether Mourinho should be sacked or if Paul Pogba is victim or villain. The real question is what’s so wrong at this once-great institution that United are in danger of becoming a serial killer of talent.

What is it about United – modern, post-Fergie, globalised and Glazer-led United – that one of the most successful managers of all time in Mourinho, has been so neutered, negative and drained. What happens when world class stars cross the threshold of Carrington. Why has Alexis Sanchez become a joke? How can Pogba go from inspirational World Cup winner to confused and chaotic and the cause of unrest. Why are the glimpses of Anthony Martial so sporadic, so few and far between? How come David Moyes and Louis van Gaal were chewed up and spat out? How did Angel Di Maria go from superstar to substitute in a few months at Old Trafford? What happened to Henrikh Mkhitaryan, to Memphis Depay? Why was Luke Shaw so nearly lost to the game?

The fear is that United are becoming a monolith which consumes to the gifted and where nothing ever sticks. From Red Devils to football’s black hole. Nothing sticks: Woodward, soon after succeeding David Gill as leading executive, half seriously said that the club could merely “throw money at it” until happening to stumble upon the right post-Sir Alex formula. Well, money doesn’t stick either, not when the strategy and the environment are awry. £600m, that’s the rough expenditure on the transfer bill since 2013, for turning United from serial, all-conquering winners, into a drifting, lifeless and inconsistent rabble.

Woodward is an intelligent and hard-working man, but he is a banker and maybe that’s why he thinks the mechanics are about spending as much as possible. What he has absolutely failed to grasp is the simple identikit that top clubs must build a world-class culture, vision and identity, with hungry, driven, high-end people in every part of the well-oiled machine.

In fact, it’s worse than that – United didn’t need wholesale rebuilding. Most things were there under Gill and Sir Alex and if a tweak was needed, an entire dismantling certainly was not. What’s worrying is how far ahead other clubs seem, both on the field and how they’re run structurally. There’s the mob from across the road, run by the same executive men and the same manager that made the modern day Barcelona into what they have become today. Then, even worse, there’s Liverpool – winning the neutral hearts once stolen by United, six years into a master plan with the string-pulling influence of some of football’s brightest brains and with a coach as charismatic and holistic as they come. It’s a bitter pill to swallow.

United? This is a place where, at an enormous cost, Di Maria and Depay were bought for Van Gaal, the very antithesis of both of those players. Where a world record could be broken to buy Mourinho the most un-Mourinho like midfielder (height and physique apart) imaginable in the free-spirited enigma that is Pogba. Where indeed the appointment could be made of Mourinho: the prince of pragmatism when the stage is set at the Theatre of Dreams.

Soon after taking over, old’ Ed said he didn’t want a director of football because he didn’t believe in the concept. He believed in the “all-powerful manager” modem of doing things. So he then gives Mourinho a new £15m per season contract in January than a matter of months later suddenly withdraws power by refusing to back transfer targets, then disclosing that the manager’s choice of centre-backs were wrong and unnecessary. Where, in all of these decisions, is the cohesive, joined-up, logical thinking. The sense of what this club, from a pure football perspective, should be about.

One thing Woodward did after the departures of both Fergie and Gill was to “reinvent the wheel” on buying and selling players. He felt the best way to beat rivals to talent was to pursue agents and personally square off deals, first with them, before going to the selling club. This policy had led to infamous agent Mino Raiola sponging £60m from incoming transfer and yet still becoming a hated figure at United. It led to throwing more than £10m the way of Alexis agent.

Throwing cash at players has become the Woodward raison d’être, too: Sanchez’s remuneration – across his four and half year contract – is thought to be in the region of around £140m. Pogba has been picking up a loyalty bonus whilst publicly questioning his manager and flirting with Barcelona. Woodward came out and said that he knows his limits. He needs that skill now.