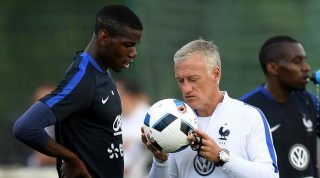 Paul Pogba relationship with Jose Mourinho has received a lot of media attention this season, but France manager Didier Deschamps is not concerned.

Deschamps believes Pogba’s reported feud with Mourinho has been blown out of proportion.

READ MORE: Agent talks about Zlatan’s future, Pogba not for sale and Verratti in talks with PSG over contract renewal

The France midfielder was a key aspect of their World Cup-winning campaign this past summer, scoring in the 4-2 defeat of Croatia in the final, however, he has also been at the centre of an alleged bust-up with Mourinho during the early stages of this season.

Pogba was stripped of the vice-captaincy role by Mourinho, despite already netting four goals in all competitions this campaign.

The United boss denied a training ground row between the pair, though sources close to the club still claim the relationship between the pair is toxic. Pogba has since claimed he was banned by the club from speaking to the media after last week’s goalless draw with Valencia in the UEFA Champions League.

But the pair enter this international break on a high note after United forced a dramatic comeback against Newcastle, winning 3-2 from a two-goal deficit, easing pressure on an under-fire Mourinho.

Pogba was named in the 30-man Ballon d’Or shortlist on Monday, as per Caught Offside, and is now preparing for a friendly against Iceland and a Nations League clash with Germany. Deschamps shares his view on the alleged feud between his influential midfield star and Mourinho.

Speaking at a press conference, Deschamps said, as per Goal: “I think it’s exaggerated. Maybe you didn’t watch their last game [a 3-2 win over Newcastle United], because I witnessed a great Paul Pogba.

“I think Jose saw the same thing as me. Some things happened and I think that, like is often the case, we make a big deal of something that isn’t.

“It’s true that there are some facts and some may have jumped to certain conclusions. When I see how Paul behaves towards the situation at his club, some may say he’s done everything he could possibly do mentally and when it comes to his individual performances, to help the club.

“There is no issue with Paul. I don’t want to be mixed up with anything and to interfere with any player’s relationship with their coach.”