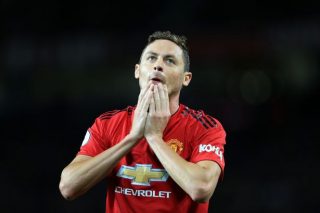 Nemanja Matic has returned to Manchester United from international duty due to an injury, which ruled him out of Serbia’s upcoming matches against Montenegro and Romania.

The 30-year-old midfielder has made eight appearances across all competitions this season and most recently featured in the dramatic 3-2 comeback victory over Newcastle at Old Trafford.

Matic left for international duty after that win, but he has now returned to Manchester to complete his rehabilitation under the club’s guidance.

It remains to be seen how long Matic will be out for and whether or not he’ll miss our upcoming league fixture away to Chelsea, where he had two separate spells as a player under Jose Mourinho.

Shaw had hoped to feature in the UEFA Nations League matches against World Cup finalists Croatia and Spain, but he will instead focus on his recovery in Manchester.