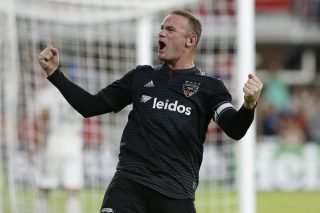 Wayne Rooney is backing his former manager Jose Mourinho, telling those Manchester United teammates he once played alongside that they have under-performed and must take their share of responsibility.

Rooney is clearly keeping an eye on things at Old Trafford whilst tearing things up in the MLS for DC United. They’ve won nine games out of 15 with their new captain, who scored both goals in a 2-1 win over Chicago Fire on Sunday.

The 32-year-old made his remarks as Mourinho waited for a public show of faith from the United board, who woke on Saturday to reports that he would be sacked over the weekend – regardless of the result against Newcastle.

Mourinho’s men trailed 2-0 just 10 minutes into the game at Old Trafford but were able to turn things around in the second back and win 3-2.

Rooney says that the recent run of poor results had reminded him of the difficult times during Louis van Gaal’s two-year reign at the club, which finished with a memorable FA Cup triumph – on the same day he received news from Ed Woodward that he was sacked and to be replaced by Jose Mourinho.

“It’s tough [at United], it has been a tough situation,” Rooney said, as per The Telegraph.

“I said the same thing when Louis van Gaal was there. He took a lot of stick but behind closed doors I said to the players, ‘We have to be doing better’. Personally I think he [Van Gaal] set us up brilliantly the way but we didn’t produce on the pitch so I am sure that is getting said behind the scenes.”

When asked why his former club was struggling of late, Rooney added: “It’s a young team, different pressure, quite a lot of those players maybe haven’t faced this before and they maybe haven’t got the senior players which I had there as a young player to help in those difficult moments. There are not enough of them to help you through it.”

Rooney was always quizzed on who he thinks is the best footballer in the world. He answered by reflecting on the two Champions League defeats he suffered at United against Barcelona, in 2009 and 2011: “If we had been against any other team but Barcelona – we don’t know – but you would have fancied us to win those games. In my eyes they are the best team ever and Messi is the best player ever. What he does is incredible.”

What about former teammate Cristiano Ronaldo?

“[They are] Different players, obviously, but Messi has just got a bit of everything. Ronaldo has gone from a winger to a striker and a goalscorer rather than taking players on all the time.

“He has gone more one or two-touch and getting in the box and scoring goals, whereas Messi has a bit of everything. You see him scoring goals from playing a deep midfield role at times. [There are times when] I’m probably still walking on the pitch and he’s scoring. So he is probably the best.”