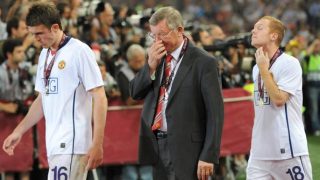 Michael Carrick says he suffered from depression for two years after Manchester United lost to Barcelona in the 2009 Champions League final.

Carrick says the 2-0 defeat triggered the “biggest low” of his career.

It culminated, the 37-year-old first-team coach says, at the 2010 World Cup in South Africa.

“It was my dream to be at a World Cup but the truth is I didn’t want to be there. I wanted to be at home,” said the ex-England international.

Carrick blamed himself for the Champions League defeat in Rome, after he gave the ball away in the build-up to Barcelona’s opening goal, but truthfully they were just a far superior side. It was a one-sided affair by all means.

“I beat myself up over that goal,” Carrick told The Times.

“I kept asking myself: ‘Why did I do that? And then it [the depression] snowballed from there. It was a tough year after that. It lingered for a long time.

“I had won the Champions League the year before, but that was totally irrelevant.

“It felt like I was depressed. I was really down. I imagine that is what depression is.

“I describe it as depression because it wasn’t a one-off thing. I felt bad or terrible after some games, but then you get over it in the next couple of days, but that one I just couldn’t shrug off. It was a strange feeling.”

Carrick kept his emotions to himself. Only his wife Lisa and parents were aware of his mental health problems during this time.

“I kept it to myself most of the time. Even my family didn’t know the full extent of it,” he added.

“It’s not something that’s really spoken about in football. I have not spoken about it before. For the lads that I have played with that are reading this, this will be the first time that they know [about the depression]. They wouldn’t know.”

Carrick made an incredible 481 appearances for United after moving to Old Trafford from Tottenham in 2006. He went on win five Premier League titles, an FA Cup and the Champions League in 2008.

I’ve had a lot of people asking about my book signings. Here are the details.
Looking forward to being in the three places that have been such a big part of my life.
All the proceeds from the book are going to charity @_MCFoundation pic.twitter.com/DjU2dYD4wC