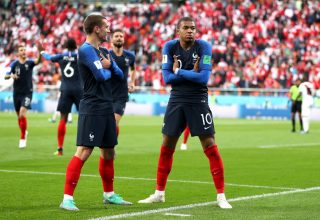 Kylian Mbappe has been compared to a young Cristiano Ronaldo by France teammate Antoine Griezmann, with the Paris Saint-Germain star being backed to become a 50 goal-a-season talisman.

At just 19 years of age, Mbappe is a two-time Ligue 1, having made the breakthrough at AS Monaco before moving to PSG, while a memorable summer in 2018 saw him claim World Cup glory with France.

Mbappe has earned Ballon d’Or nominations alongside the likes of Ronaldo, Lionel Messi and Neymar.

Atletico Madrid forward Griezmann is another on that list and he believes there is still more to come from Mbappe, who is already drawing comparisons with the very best.

“Kylian reminds me of Cristiano when he was in Manchester,” Griezmann told France Football.

“Cristiano was the guy out wide, doing a lot of dribbling and occasionally scoring. He was not looking for goals, though.

“When Kylian does what Cristiano did in Madrid, thinking only about scoring, then he will do the same. He will be scoring 50 goals per season.”

Only Paul Pogba made the Ballon d’Or 30-man shortlist from Manchester United this year. Yeah, they forgot about David de Gea! *Asleep at the wheel*

Kylian Mbappé just scored four goals in 13 minutes against a highly rated – but down to ten men – Lyon. He’s annihilating them. He’s 19. Incredible player to watch live. And obviously adored in Paris, where the whole stadium are stood singing his name.