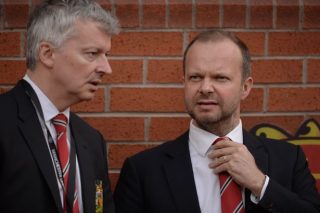 Speculation that Zinedine Zidane is in line for the Manchester United job continues, while Jose Mourinho wants to discuss a January plunge into the transfer market to bolster his side and not see Ed Woodward fail again to deliver.

The Sun claims Mourinho will have clear the air talks with Woodward in the next 48 hours ahead of a club board meeting on Thursday.

READ MORE: Why Ed Woodward has been a disaster for Man Utd

It was reported last week by Miguel Delaney of The Independent that the international break would allow the board to consider Mourinho’s position without noise in the background. However, The Mirror’s David McDonnell stated on Friday night that the manager would be sacked over the weekend, regardless of what result the lads got against Newcastle. That latter has been proved incorrect.

The meeting, as alluded to above, will take place in London and Mourinho is said to be convinced the club have been making contingency plans for his succession – as they did with him before it was time to sack Louis van Gaal.

Neil Custis states in his report that if Woodward can convince Mourinho that’s not the case, the Portuguese will then use the meeting to discuss a January plunge into the transfer market.