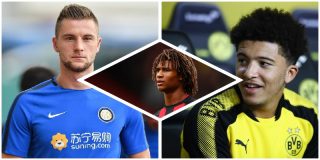 No matter what time of the year it is, Manchester United is a hub for transfer speculation.

Put it down to a combination of the international break, uncertainty over Jose Mourinho’s future or some guesswork with Zinedine Zidane tipped to take the Portuguese’s position as manager.

Here, we take a look at some of the players currently being linked with a move to Old Trafford.

ESPN claim he is at the top of United’s transfer list for the foreseeable future.

Skriniar has contributed to both of Inter’s wins in the Champions League this season, with his aggressive manner as a centre-back enough to shut down Harry Kane as they beat Tottenham in dramatic fashion.

Inter paid just €20 million for his services in 2017. Now, he would cost over triple that figure.

Nah, from what we gather, Sancho wasn’t keen enough to wait around for first-team opportunities at City. He took a chance by moving abroad to Germany and has been rewarded since after being called up to Gareth Southgate’s England squad.

The Mirror claims United are making moves to sign the winger next summer. This season, he has six assists and one goal to his name already. A stunning record for any 18-year-old in any top division.

The Star claims United are after the versatile Bournemouth defender.

The former Chelsea man is a Netherlands international and can play both at centre-back and defensive midfield – and he shouldn’t be mistaken for Daley Blind.

Mourinho should know the 23-year-old already from his time at Stamford Bridge.

A throwback to the World Cup!

Granqvist, 33, would be a short-term option at centre-back if anything.

He claims United have been in touch over a possible move, The Evening Standard report.

Along with Skriniar, ESPN believes Romagnoli is a top target for Mourinho.

AC Milan are currently 10th and face missing out on the Champions League once again, so we ought to get our act together in order to find ourselves in a stronger negotiation position.

Romagnoli has played for AC Milan over 100 times.