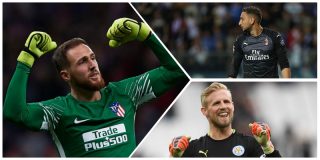 Manchester United face a serious battle to convince David de Gea to stay at Old Trafford beyond the end of his current contract.

United are invoking an option to extend the Spain goalkeeper’s existing deal by 12 months until the end of next season. But talks over a new long-term contract have reached an impasse and United are now under growing threat of losing De Gea for nothing in June 2020, or being forced to cash in before then on their No 1, another unwelcome concern for a club in the throes of turmoil.

Should the worst indeed come to the worst and the best stopper on the planet ups sticks and moves elsewhere, we take a look at five possible replacements to fill the void.

Undoubtedly the best keeper in La Liga, Oblak – still only 25 – should be top of United’s hit list. The Slovenian is easily among the best five keepers in world football. He signed for Benfica as a 17-year-old and became a key man in their treble-winning season, before – two seasons on – he conceded an all-time record low of a paltry 18 goals in his second season under Diego Simeone at Atletico Madrid.

A Europa League and Super Cup winner, as well as a Champions League finalist, there is sure to be a mighty price tag on his head and it would take some doing to prise Oblak from Atletico’s grasp.

Our friends at Caught Offside have even shared a reaction from fans to potentially signing Oblak.

Like Oblak, ter Stegen plies his trade in Spain and is a treble winner. He is consistently impressive and in a similar style to De Gea, he’s a tall and agile shot-stopper who commands his area and has established himself as number one for both club and country.

Due to his ability at playing out from the back, he is considered a sweeper-keeper, which may not appeal to Mourinho or the next United manager as we’ve often championed a traditional style of keeper.

A slightly left-field choice, this, but Schmeichel, like his dad and United legend Peter, is a Premier League winner and has long been touted with a move away from the King Power to one of the top flight’s elite clubs. Age and longevity would be a factor at 31 and Schmeichel would bring an element of risk, but we could certainly do a lot worse than his signing.

He’s been linked with United in the past and has also attracted interest from other heavyweights including AC Milan and Juventus in Serie A. Like his father he has played for Manchester City and was also a key man during Denmark’s run to the World Cup last 16, saving two penalties in a shootout with Croatia, whom eventually prevailed.

Since he burst on to the scene as 16-year-old in 2015, Donnarumma has become one of the best young goalkeepers in the world, breaking numerous records along the way. Still only 19, he’s made over 100 appearances for the Rossoneri and is the Italian national team’s youngest ever keeper. Widely regarded as the natural heir to legendary custodian and his idol Gianluigi Buffon, Donnarumma ticks all the boxes for United: he’s young, is already an international, he’s plying his trade for a massive club and shares many of the same logic-defying abilities as De Gea.

He certainly couldn’t do any worse than the Reds only other Italian keeper, the awful and error prone Massimo Taibi. It could be difficult to get Donnarumma however, as Milan are his boyhood side and he has stated that he’s happy to remain in Italy. Coupled with that, he is likely to come with a hefty transfer fee.

France’s World Cup winning captain is easily one of the best in the Premier League, arguably second only to our very own De Gea. Again, would be an unlikely move as he’s 31 and Tottenham would be unwilling to sell to a direct rival. A double centurion in north London, Lloris is a leader, a superb shot stopper and his communication and organisation is excellent. Like ter Stegen, the Spurs skipper is considered a sweeper-keeper and was voted the second best keeper at the FIFA awards in 2018.

Lloris would bring experience, composure and undisputed quality between the sticks at United. Whether we would get him to replace De Gea is debatable but he’s certainly worth considering.