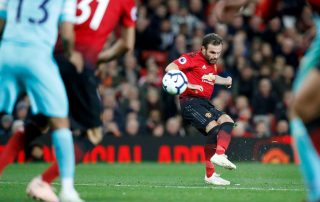 Following the 1-1 draw with Wolves a week ago, Juan Mata cut his blog short. The Spaniard didn’t feel it was the right time for social media or blog updates.

Manchester United are going through a bad period at the moment and the manager’s job is very much on the edge. Jose Mourinho did not have the full backing of the board in the summer and they will pull the trigger if results don’t pick up.

However, the dramatic comeback against Newcastle at the weekend has lifted spirits and Mata is back with his Monday morning blog.

“I guess that you’ll be more up for reading this post than you were a week ago,” Mata begins with.

He adds some notes about the importance of the comeback from 2-0 down and how, in the second half, the lads gave all they had from pushing on and showing courage.

Mata goes on to thank all of the fans for their incredible support: “The energy and lift that the fans gave us was key to taking the win.

“In the dying minutes, above all, Old Trafford transformed into the kind of stadium that every other one in the world wants to be, a stadium where goals can be scored from the stands too.”

It was Mata who scored United’s first goal in the 3-2 comeback with a stunning free-kick. He describes the three key factors to taking a free-kick: “I believe that there are three key factors when it is time to take a free-kick: practice (something that I really enjoy during training), concentration (in order to focus on striking the ball well) and confidence (to believe that it is going to end in a goal).

8 – Since his Premier League debut in August 2011, Juan Mata has scored more direct free-kick goals than any other player in the competition. Hope. #MUNNEW

“After that, obviously it doesn’t always go in… but luckily on Saturday it did.”

Mata also added a side note to John Terry, who announced his retirement from playing football on Sunday night: “Congratulations on your extraordinary career, John. It was a pleasure to play with you. I will never forget how you helped me out at the start in London, and the great moments that we shared. Thank you and all the best for the future!”