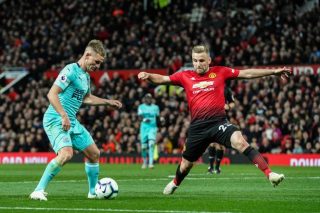 Manchester United left-back Luke Shaw is reportedly discussing terms for a new deal at Old Trafford, after a stellar start to the 2018-19 campaign for the player.

Shaw has cemented his place in United’s starting eleven this season, impressing supporters and pundits alike, as well as earning a place in Gareth Southgate’s squad after missing out on the World Cup this past summer.

The 23-year-old has arguably been the Reds’ best player over the last two months, kicking on despite the team’s recent run of bad form.

According to Bleacher Report journalist Dean Jones on Twitter, United are ready to reward Shaw with a contract extension and have opened talks with the England international.

Understand United are finally opening contract talks with Luke Shaw. Looks like things might be turning around for him at Old Trafford

Shaw’s career up until now has been blighted by injury and ongoing fitness issues, so hopefully, the knock he sustained against Newcastle at the weekend isn’t a serious one, though it could keep him out of games against Croatia and Spain over the next 10 days for his country, as per Manchester Evening News.

He thoroughly deserves a contract extension and it’s great to hear talks are underway with the club.