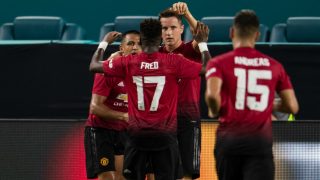 When it comes to foreign reports, Sports Witness is a fantastic website for giving its readers insight into what newspapers around the world are writing.

They claim El Correo, a local Basque newspaper, are the source to trust when anything Athletic Club Bilbao related pops up.

READ MORE: Congrats on retirement, John Terry; Thanks for Moscow 2008!

It is alleged that they are usually ahead of the game when it comes to transfers in and out of the club, such as Aymeric Laporte’s move to Manchester City last year.

This morning’s paper has got Ander Herrera splashed across the front of their sports section. SW claim this means a lot more than the “half baked links” between the player and other Spanish clubs in recent years, such as La Liga champions Barcelona.

El Correo claims Athletic will try to convince Herrera of a move during the January transfer window. They also believe ‘Operation Herrera’ is possible because Jose Mourinho doesn’t play the midfielder very often.

Should Herrera leave Old Trafford for Bilbao, it is expected that he will become the club’s highest earner.

Herrera ‘assumes that his time at United comes to an end’, the newspaper states, before claiming Athletic have sent a message that they’re ready to put their words into action and make a move.