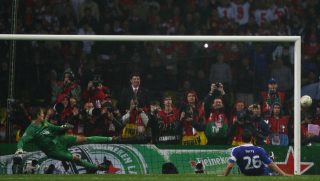 We would like to congratulate John Terry on his retirement from playing football.

No, seriously. He could have won the cup, but he f**ked it up, Viva John Terry!

READ MORE: Zidane not the only Frenchman in contention for Man Utd job

The 37-year-old has hung up his boots and is expected to focus on a career in management. Spartak Moscow offered him a job last month but he said no, probably because Terry would be constantly reminded of the night he slipped on the spot and contributed to Manchester United’s third European Cup.

Terry’s final game as a professional was Aston Villa’s 1-0 Championship play-off final defeat to Fulham in May.

He won 78 England caps and decided to call it a day on the international stage after behaving questionably. Not for the first time, eh?

John Terry retiring thanks for the memories #Moscow #ChampionsLeague winning night. One of best night’s of my life watching in naafi at Deepcut. But yeah a great career. Granite defender and leader pic.twitter.com/D4i1Pxbbgt