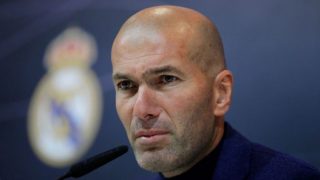 Laurent Blanc spent two years at Old Trafford at the end of his career, though he certainly made a bigger name for himself with clubs such as Montpellier, Barcelona, Marseille and Inter Milan.

Still, it may be that the connection with United could see him come into contention, while the 52-year-old has previously impressed in spells in management with Bordeaux, Paris Saint-Germain and the French national team.

Don Balon claim Blanc could be competition for fellow Frenchman Zinedine Zidane, who has been long linked with the United job amid Mourinho’s struggles of late.

One imagines fans would prefer Zidane due to the heights he reached whilst Real Madrid manager, as well as his offensive brand of football.

Blanc, however, is the more experience name and has also won major titles in France. It could also go his way having played in the Premier League prior to retirement and knowing the country better than Zidane.

It just seems disrespectful to be talking up other managers a day after United’s dramatic comeback to Newcastle. Then again, that would suggest how far we’ve fallen these years that a win over the Magpies has such significance.

Still, you have to wonder how reports like this make Paul Pogba and Anthony Martial feel. Two France internationals, who have questionable relationships with Jose Mourinho, apparently wanted moves elsewhere.