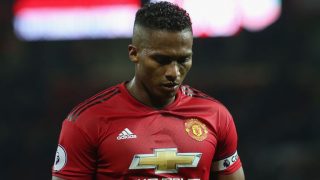 The Ecuador international has had a troublesome start the season, with performance levels dipping and clashes with the manager, including a mistake he made last week ‘liking’ an Instagram post about Jose Mourinho getting the axe.

On Tuesday night, he struggled against La Liga outfit Valencia and his aged (33) showed on the pitch. There were looks to the bench from the stands, but Diogo Dalot had not been selected for the matchday squad.

However, as suggested in our line-up prediction piece, Ashley Young is likely to return at right-back and Valencia has this morning suggested he won’t be involved in the starting team.

Sharing a picture of United’s huddle from Tuesday night, Valencia posted the following caption this morning: “Good luck to all of my team.”