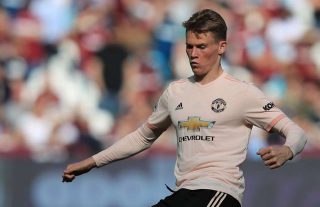 Manchester United fans have reacted to the line-up against Newcastle and they don’t seem best pleased.

The attacking trio of Romelu Lukaku, Anthony Martial and Marcus Rashford will satisfy supporters but it’s sections of the midfield that has left fans most confused.

Andreas Pereira, Fred and Marouane Fellaini are all on the bench with Jose Mourinho preferring Scott McTominay to partner Nemanja Matic and Paul Pogba.

Like midweek against Valencia, Diogo Dalot has not even made the bench as a back-up to come in for Ashley Young at right-back.

Antonio Valencia has been fully dropped from the matchday squad after his horrific display on Tuesday night in the UEFA Champions League.

Here is how some United fans reacted to the line-up on Twitter:

Teacher’s pet McTominay starts again. Don’t want to sound harsh but have seen nothing to suggest he should be a PL player let alone start for United.

Two holding midfielders at home to Newcastle. We spent over £50m on Fred….

Fans can’t be unhappy with that line-up. Like the front three. Let’s see what they can do.

Lost for words on why Dalot isn’t starting.

Time will tell if he makes it or not. I’m just uncomfortable with the way Mourinho uses him as a pawn to make a point. McTominay deserves better than that. He should be out on loan getting regular minutes. Pereira should be starting ahead of him.