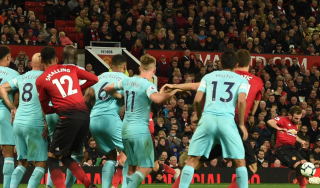 De Gea – Unable to do anything about the first 2. Crucial save late in the first half to keep it 2-0 – 5

Young – Pathetic defending for both goals. Schoolboy stuff, but this’s what happens when you’re playing an ageing winger as a full back. Incredibly lucky not to give a first half penalty away. Once again, up to setting up the winner, his atempts to get crosses into the opposition box were truly painful – 3

Bailly – Careless fouls again. Played with zero composure, not even slightly surprised by him being pulled at 2-0 – 3

Smalling – No contact with any Newcastle attacker. He should be leading this back four, but he continues to look panicked by every attack he faced – 4

Shaw – Energetic and once again, the only bright spark in a shockingly poor back 4. Did a great deal to try and maintain the second half pressure Utd built up when we pushed to get back in the game – 6

McTominay – High energy and clever work to retain and regain possession while in midfield. Once he was moved into the back 4 he played like he didn’t have a clue what to do, which to be fair to the lad, he doesn’t!! – 3

Matic – Played like it was a testimonial, and he’d been on the pink gin since Thursday ahead of it. All the control and energy he gave us last season appears to be long gone – 4

Rashford – Huge chances wasted at 2-0 in both halves of the game. Just not good enough to be considered a reliable goal scorer at this level – 2

Martial – Got some decent crosses into the area, but with so little attacking movement from his team mates, there was no sign of anything happening off them. Crucial run to earn the free kick for Mata’s goal, and a very impressive finish to level things – 7

Lukaku – Constantly had to drop deeper than boyband lyrics to get any possession. Decent with the ball, but he was never in the box to do the job he’s in the side to do. Vital clearance off the line at 2-2 – 4

Fellaini – Did what he’s been doing well all season. Controlling the ball at the back, and offering a useful attacking threat when we get the ball forward – 5

Alexis – Getting closer and closer to Depay levels of performance in that number 7 shirt by the game, but good lord, the difference he’s made to my mood and life with one header is beyond my vocabulary!! – 6