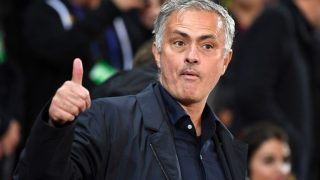 Jose Mourinho is hoping his players can put an end to their four-match winless run today against Newcastle in the Premier League.

It is clear pressure is building for Mourinho some of the view his job has become untenable. Reports last night suggested he was in line for the sack this weekend, although the club has dismissed that as ‘nonsense’.

This is the final game before the players go on international break, a period that should give United time to think about Mourinho’s position without noise.

However, Mourinho is already looking beyond that international break with Chelsea away and Juventus at home in the UEFA Champions League on the schedule.

Football reporter for BBC Sport, Simon Stone, has clued us all in on the manager’s programme notes. They suggest the manager does not expect to get the sack, as reported, and is looking forward to turning things around.

Jose in programme: “With such huge games coming up later in the month (Chelsea away & Juve home), it would obviously be good for our confidence to end this current run of fixtures with an important victory this afternoon. Thank you for your support and I hope you enjoy the game.”

Every fixture now is a massive game. United have no right to slip into a complacent state of mind after recent results, with every side fancying their chances against the Reds.