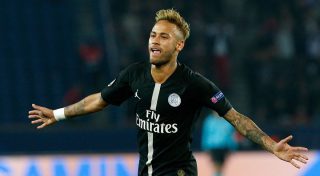 Paul Pogba has been approached about a possible move to Paris Saint-Germain by Brazilian star Neymar according to reports today.

The French World Cup winner’s relationship with United boss Jose Mourinho looks increasingly strained and over the past few months, he has been linked with moves to both Barcelona and Juventus.

However, it remains to be seen whether Barcelona will be able to afford Pogba with their already huge wage bill and the same goes for the Serie A giants after signing Cristiano Ronaldo from Real Madrid.

Now PSG has emerged as a possible destination for the midfielder according to Goal. They claim that Neymar has “sounded out” Pogba about such a move which would fit the profile of the ambitious Paris club, who are doing their utmost to build a side capable of winning the UEFA Champions League.

Hopefully, they’re not watching Pogba playing for United because that would be an immediate turn off for the Ligue 1 outfit.

Mourinho has stripped Pogba of his vice-captaincy role and the pair were caught having a frosty exchange at the Carrington Training Complex some weeks ago.

The report from Goal says that Neymar was in contact with Pogba at the end of September to gauge whether the Frenchman would be interested in a move back to his homeland. It is understood that the pair are good friends, although they’ve never had the chance to play together.