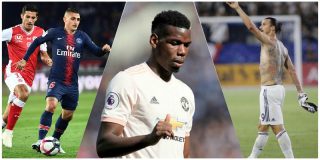 Italian super-agent Mino Raiola spoke to Rai Sport about the future of his most important clients such as Paul Pogba, Marco Verratti and Zlatan Ibrahimovic.

Former United striker Ibrahimovic has been linked with a return to AC Milan and Raiola says they’re open to talks. The Swede is currently applying his trade in the MLS with LA Galaxy, scoring belters for fun but still keeping track of how Jose Mourinho is doing at Old Trafford.

“At the moment there are no chances,” Raiola said, as per Calciomercato.

“Talks with the club are not recent but we are open to speaking about it. Now there are normal people running the club before there was no club at all. Zlatan will always be a ‘first choice’, he has never asked for guarantees. There is no open nor closed door, Ibra respects Leonardo and Zlatan has amazing memories of AC Milan. But the same goes for PSG…”

A classic line from a football agent. Doors open, ruling nothing out. We’re surprised he didn’t mention United, but then again, there are tensions between Raiola and United again.

Raiola, usually more than willing to run his mouth, did not want to talk too much about Pogba.

He said: “It’s better not to talk about this situation. It’s not an easy moment and Man United have always been clear, Paul is not on the market. Verratti? We are talking about a new deal with PSG. They are happy with him and it’s clear that he is a crucial man for the national team.”

On Verratti, the only turn off currently is his agent. It would make sense for United to go for a player like him if Pogba is to leave next year, but the club should be wary about opening the chequebook for Raiola again.

Sir Alex Ferguson may approve of that message.