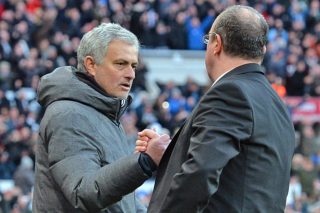 Two giants of European coaching, marginalised from the front line of Premier League and Champions League conflict, battling internal politics at their clubs, where their grips on power are loosening by the day.

Once upon a time, Mourinho and Benitez’s careers saw glory days in their managerial careers but now they can only reminisce.

Perhaps that is the reason Mourinho has changed his tune as he did with Arsene Wenger after years of slating the Frenchman only to give him a fitting send-off at Old Trafford last season when it was known he wouldn’t be returning to the ground with Arsenal again.

The recent form showed by The Reds and Newcastle won’t matter prior to kick-off on Saturday. It will be a new day, a new game and another opportunity to get points on the board.

They hardly need a greater incentive to get a result, but a war of words can go a long way in dark times.

United are without a win in four games across all competitions, our performances have grown more insipid with each match, and the manager has lit a series of fires with his criticism of players and board members.

“Our opponent for different reasons they also need the points,” said Mourinho, as per The Mirror. “Very, very, very good coach. A team that is always very well organised especially against teams in top half of the table.

It’s a slightly different situation for Benitez at St James’ Park, although woeful in its own way. The Magpies are yet to win a league game, have just two points from seven matches and are positioned 18th in the table.

The Newcastle fans booed Benitez for the first time when he took off Matt Ritchie in last week’s 2-0 defeat to Leicester.

The ever controversial Mike Ashley has ignored calls to invest in the squad, leaving Benitez and Newcastle in a pretty dire situation.

Benitez’s position, like Mourinho, has probably left the safety zone. More reason to celebrate a win at the weekend.