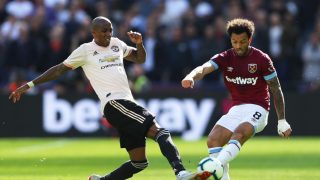 Jose Mourinho told MUTV there are no fresh injury concerns ahead of Manchester United’s Premier League encounter with Newcastle, while Ashley Young could return to the squad.

Young missed the midweek draw with Valencia in the UEFA Champions League on Tuesday with a minor problem but could be in contention to replace Antonio Valencia at right-back again for Saturday’s game.

Marcos Rojo, Ander Herrera and Jesse Lingard have all been absent recently through injury.

When asked by MUTVs Mark Sullivan if any of the four players injured for the Valencia clash could return, the boss said: “No, it’s exactly the same [squad]. No new injuries and the players who were injured [are still out] with the possibility of Ashley Young coming back to the squad but Ashley was really a minor situation.”

The players haven’t had much time to prepare to face The Magpies but Mourinho feels it has been enough time to get ready for Rafael Benitez’s side.

“[We have had] recovering time for the players that played against Valencia and good work for the others that obviously were in perfect condition to train,” the manager added. “Today [Friday], the third day [since the Valencia game] is the first day we have all of the players together and three days in between matches is more than enough time to have the players ready for the weekend match.”

Newcastle, who sit 18th in the Premier League table after collecting just two points from their first seven games, could be boosted by the return of Federico Fernandez and Paul Dummett but The Reds will still be expected to take all three points from the match.

The defensive duo missed Newcastle’s 2-0 home defeat against Leicester last weekend but should have recovered in time for the trip to Old Trafford.