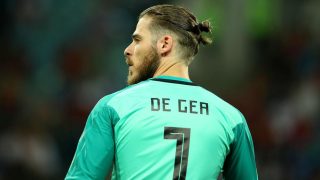 David de Gea is reportedly fed up with Jose Mourinho’s reign at Manchester United, the latest high-profile player to turn against the manager.

That is according to The Sun, backing up an earlier report from The Mirror that the players feel Mourinho’s sacking is only a matter of time away from happening, following fall outs with Paul Pogba, Eric Bailly and Alexis Sanchez.

De Gea is yet to put pen to paper over a new deal and there are now fears the former Atletico Madrid ace is ‘fed up’ with the current regime.

The shot-stopper has won four of the past five United Player of the Year awards and was inducted into the FIFA World XI last month.

His current expires at the end of the season, but there is an option to extend it by a further 12 months.

However, despite negotiations over a new deal starting last year there has yet to be any real progress.

It is believed that the Spain No.1 will eventually sign and become the highest paid goalkeeper in world football.

Speaking last month about extending his contract, De Gea said: “I feel really loved at his club from the fans from all the people who are for this club.

“I am really happy to play for this club, one of best clubs in the world, so for me really good to be part of this club.”