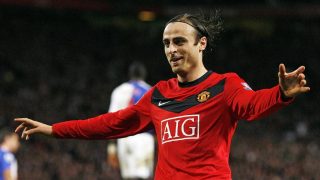 Former Manchester United striker Dimitar Berbatov has sympathised with the current set of players at the club as they ride a poor run of results.

Jose Mourinho’s side are on a four-match winless run across all competitions and need to turn things around on Saturday against Newcastle in the Premier League.

The Reds drew 0-0 with struggling La Liga outfit Valencia on Tuesday night in the UEFA Champions League. And that result followed a shock 3-1 defeat to West Ham away from home, which came on the back of being knocked out of the League Cup by Championship side Derby County and a boring draw against Wolves at Old Trafford.

Berbatov explains what it’s like to be a player in a bad run of form, as per The Peoples Person: “When you’re not at your best, the stadium is full and the fans aren’t happy, and things aren’t happening on the pitch it can be a horrible experience.”

“For you, the pitch gets smaller and smaller, the fans get on your back, you put even more pressure on yourself.

“Every mistake leads to another mistake and self-doubt because we are all humans and we start sabotaging ourselves.

“It happens to every team in football.”

Berbatov adds what the Reds need to get out of their current form: “[They need] to get a goal in the first 15 minutes to give them self-belief, assurance and calmness on the ball.

“I saw it in the last game that they want to put on a show for each other and the fans.”

It’s exactly what United need but it is also easier said than done. With Romelu Lukaku’s current form below par, where is that early goal going to come from when United sit back in games like these nowadays?

Teams come to Old Trafford and have a go. They’re no longer frightened by being ripped apart by an attacking side.

Mourinho often looks too worried about losing games than focused on winning them!