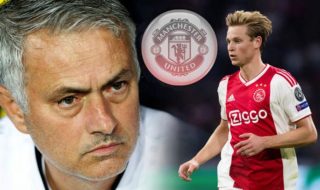 Speculation linking Manchester United with Ajax midfielder Frenkie De Jong is growing, but we will face competition from Tottenham and Barcelona and he won’t come cheap.

De Jong is considered one of the brightest young talents in Europe and he made his senior Netherlands debut last month when he registered an assist in a 2-1 win over Peru.

READ MORE: Ajax ace Blind explains what it was like to work under Mourinho

The 21-year-old came through the ranks at Willem II before joining Ajax’s academy. He made his first-team debut for the Dutch giants in September 2016 and has gone on to feature over 50 times for the club.

There has already been a lot of talk about De Jong this season, with a keen eye from a number of Europe’s elite clubs tracking his performances in the UEFA Champions League.

He is comfortable on the ball, strong and versatile enough to play in defence and midfield.

It has been reported, as per Manchester Evening News, that De Jong could set United back £70 million which would be a whopping investment.

According to former Barcelona midfielder Xavi, De Jong is a similar player to Sergio Busquets.

“He’s young, but I think he can make a huge contribution [to Barcelona] now,” Xavi said recently, quoted by Goal.

“He is seen as a beastly talent. He’s really a player to keep an eye on. De Jong’s profile is exactly what Barcelona need. A player who is technically very strong, wants to work for the team, but above all has a lot of talent.”

When asked about potentially leaving Ajax, De Jong himself admitted it is unlikely this year, but stopped short of completely ruling it out.

He told ElfVoetball : “That interest is known by now, but I am still an Ajax player and I can’t say much about it now.

“Certainly, you never know, but there is a big chance that I will stay at Ajax this season. I really want to play in the Champions League with Ajax.”

Without further ado, check out Tifo Football’s tactical profile of De Jong below: