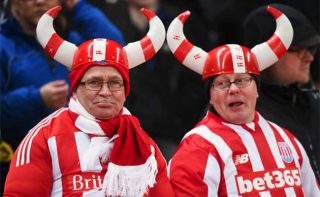 Oh. I had forgotten all about Stoke City.

Jose Mourinho has suffered the biggest dig seen in the world of football.

In fact, so damning we weren’t sure whether to show you guys or not…

And, with Manchester United struggling at the moment, we didn’t want to put you through even more torment. We’re not playing good football, our players have effectively downed tools, and Mourinho does not have the answers. He just blames everyone bar himself.

One prominent Twitter account (@FootyHumour) with a hefty following decided to have a go at the manager’s style of play, recently stating: “Only Jose Mourinho could have a team consisting of Paul Pogba, Martial, Mata, Sanchez, Rashford and Lukaku and then decide to play like a 2009 version of Stoke City.”

But the almighty blow came when Stoke’s Twitter account got involved, keen to point out that back in 2009, Stoke actually managed to beat Tottenham and West Ham, both of whom stuck three goals each past United this season.

Not quite, we were beating Tottenham and West Ham in 2009.#SCFC 🔴⚪ https://t.co/HVjjvVQn3P

Great. Piss being taken out of us by a Championship club on Twitter.