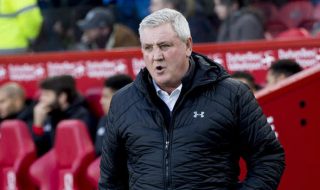 When The Independent reported this week that Ed Woodward would delay managerial change at Manchester United, we did not anticipate something as bizarre as Steve Bruce being suggested as the right man to succeed Jose Mourinho in the hot seat.

That claim comes from talkSPORT’s Darren Gough, who believes the former United captain should be a candidate for the job should Mourinho get the sack.

Bruce was sacked by Aston Villa after a number of questionable results and performances just a few months after missing out on Premier League promotion through the playoffs.

Mourinho, on the other hand, has been under increasing pressure due to our poor start to the season – the Reds’ most recent disappointment a 0-0 draw at home to Valencia in the UEFA Champions League on Tuesday.

This has led to reports that his days at Old Trafford could be numbered with Zinedine Zidane the rumoured frontrunner to take over.

However, Gough thinks United should consider hiring Bruce on a temporary basis while they look for a bigger name.

Bruce played for United for nine years (1987-96) and is currently without a job.

And Gough’s fellow Drivetime host Adrian Durham was in sheer disbelief at the prospect of Bruce at the United helm.

talkSPORT has provided the hilarious exchange between Durham and Gough on the prospects of Bruce becoming Mourinho’s successor.

Goughie: He knows the club, he’s a fan of the club and if he went to Manchester United and you gave it to him until the end of the season I don’t think you’d get many United fans going ‘oh not him!’

Durham: Hang on. This is Manchester United we’re talking about.

Goughie: Yeah; we’re talking not a rushed decision so they should get somebody in who knows the club, get him in until the end of the season to make sure they go through all the right processes to get the right manager in.

Durham: When you say ‘he knows the club’, Bruce hasn’t been there for decades.

Goughie: Oh, but he knows it!

Durham: He knows it, what does that even mean? Can anyone who played 20 years get it? Will appointing Steve Bruce give United a chance of winning the Champions League or competing for the Premier League title?

Durham: Well what’s the point of appointing him then?!

Goughie: Because he knows everything about Manchester United and he can do his best till the end of the season. It doesn’t mean he’ll get the job full-time. It just means Manchester United, rather than rushing, can get everything they want in a manager and take their time in getting the right man for the job. Because if now they get rid of Mourinho and get a manager in three days, is that not a rush?

Durham: I’m just bewildered. Am I dreaming? Are we actually talking about Steve Bruce to Man United?

🗣 @DGoughie: “He goes in and tries to do his best until the summer…”

What do you think #MUFC fans? 👀 pic.twitter.com/cKo2FNyuDQ