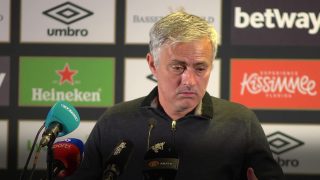 According to David Anderson of the Mirror, Jose Mourinho has lost a growing number of Manchester United players who feel he is finished at Old Trafford.

He furthers his report, backed by a “source close to the dressing room”, by suggesting the players have lost faith in Mourinho and some have been left hurt by his repeated criticism of individual players, and believe “he has undermined a team spirit and confidence.”

If this is true and the players do feel the manager has created such a negative atmosphere, Mourinho’s job has become untenable.

It is no secret now that Mourinho has clashed with several players several times. Paul Pogba was stripped of his vice-captaincy after a series of rows and public spats, Marcus Rashford has had his criticism spurted out for all to hear, as well as Alexis Sanchez and Antonio Valencia for their attitudes.

Anything but a win on Saturday against Newcastle will only inflict more pain and suffer for the manager, who has already seen his team go on a four-game winless run.

It’s never a good sign when there are moles in the dressing room. It offers us insight, but it also suggests, in this case, sheer player power whether you agree with their supposed reasoning.

Man United, we’re above this.