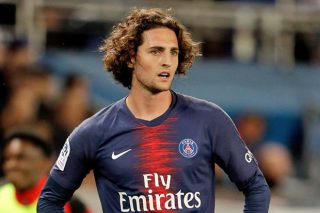 Adrien Rabiot has made it clear he doesn’t want to stay at Paris Saint-Germain.

The midfielder has rejected his club’s third’s definitive contract offer, which stood at €7.2 million p/y, or €138k p/w, plus bonuses, according to Paris United.

Although Manchester United haven’t really been linked with a move for Rabiot, Caught Offside writer Magnus Eriksen argues he would be a “superb addition” to our side, especially if Paul Pogba is on the move in the summer.

As pointed out via Transfermarkt, the France international is due to be out of contract with PSG at the end of the season, meaning he could potentially switch to Old Trafford on a free next season or on the cheap in January.

Last month, ESPN claimed Liverpool were after Rabiot – and they already have a more efficient midfield than United. Missing out on a player like him to a rival would undoubtedly be a bitter pill to swallow unless a better alternative was signed and that could be costly.

The Daily Mail also claim the likes of Chelsea and Juventus are also showing a big interest in the 23-year-old.

These are not clubs who urgently need to bolster their midfield more than United, which makes you wonder why we’ve yet to show any interest in signing Rabiot when he could be available in a bargain deal.

So often United have splashed the cash on players without necessarily taking much consideration into whether or not they fit into the squad – with Pogba and Alexis Sanchez being current examples or Angel Di Maria from the Louis van Gaal era.

Rabiot has his best years ahead of him to develop and improve into precisely the type of midfielder United need if he isn’t already that.