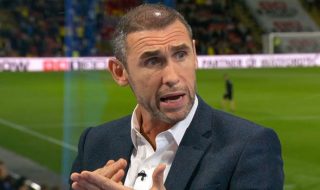 The Spanish side, who have won just one game so far this season, emerged unscathed from Old Trafford with a goalless draw to extend United’s winless run across all competitions to four matches.

As a result, Mourinho is under intense pressure to save his job. United face a struggling Newcastle on Saturday and Keown insists the United boss must be more adventurous with his team selection.

‘Individually, Matic, Fellaini and Pogba are all good players but they simply do not work together,’ said Keown, who called the trio ‘dinosaurs’ in his role as co-commentator for BT Sport on Wednesday.

‘All three are big, loping players and lacked the energy and industry someone like Fred would have brought to the side.

‘The midfielders all operated independently to one another. Pogba and Fellaini committed themselves high up the pitch and when Valencia were attacking, Matic was overrun.

‘When United wanted to build attacks, Matic was the only option the defenders could pass to.

‘It meant that United simply could not build from the back and at times their best option was kicking it long to Fellaini.’

But Mourinho has alternative options in midfield to mix it up if he wishes. He obviously felt the midfield trio selected on Tuesday night were capable of putting the sword to Valencia.

New signing Fred has yet to make a real impact and fellow Brazil international Andreas Pereira is fighting to get back into the team.

There’s also Scott McTominay, who featured last weekend against West Ham at centre-back, but the Scotland international is further down the pecking order than other players.

United were linked with a move for Paris Saint-Germain midfielder Adrien Rabiot earlier to join Chelsea, Liverpool and Juventus in the race for the Frenchman’s signature.