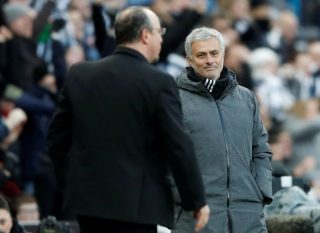 If ever a beleaguered Manchester United side could hand pick a fixture to reverse their alarming slide, few could have disputed Old Trafford as the venue and Newcastle United as their opponents.

It is getting towards do or die for Jose Mourinho, who is under increasing pressure to see an upturn in fortunes after a horrendous spell featuring Wolves, Derby, West Ham and Valencia.

United have not won on home soil since narrowly seeing off Leicester City on the opening Friday of the season. This Saturday, they face Rafa Benitez’s side who sit in the bottom three, having not won a game yet this season, and could potentially be worse off than the three points they are already adrift of safety by kick off.

As per Oddschecker, United are clear favourites priced at 9/20 with Bet365, while with the same bookmakers you can get a draw at 7/2. If you fancy a real upset and think The Magpies will come out on top, Benitez’s men are priced at 8/1 to come away from Old Trafford with all three points.

Mourinho and Benitez have history on the touchline, but all histrionics need to be put to one side as far as the former is concerned, he has far too much on his plate to concern himself with sparring with his rival. Frankly, there has been enough sparring in-house for any more shenanigans.

Newcastle have prepared for the fixture, very much in keeping with the Spanish waiter’s waistline, by summoning players, staff and Mike Ashley for emergency clear the air talks over pizza and pasta.

Whether or not their players will be inspired by double pepperoni or linguine, it’s clear that this game is a must win for United and Mourinho and they will not have many better chances to give everybody some welcome respite.

It’s rather simple, Saturday has to be a feast rather than more famine for United.