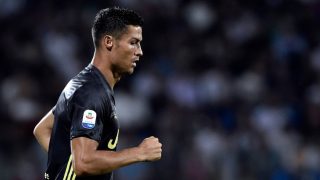 Juventus have released an emphatic statement in defence of their star player and summer signing Cristiano Ronaldo amid allegations of rape by model Kathryn Mayorga.

DER SPIEGAL have recently reported on Mayorga claiming Ronaldo raped her in 2009, which the former Manchester United forward has since come out and denied strongly on Twitter.

The Italian giants have now responded to the story as well and their message is a curious one, which suggests they’re defending Ronaldo’s character regardless of whether or not this story amounts to more.

The Independent are among the media outlets reporting the incident is set to be investigated by the police, so it may well be that more concrete evidence could still come out as the story unfolds.

Juventus, however, have issued a two-tweet official statement praising Ronaldo’s professionalism and seemed to play down any reason to change that view based on something that happened nine years ago.

.@Cristiano Ronaldo has shown in recent months his great professionalism and dedication, which is appreciated by everyone at Juventus. 1/1

The events allegedly dating back to almost 10 years ago do not change this opinion, which is shared by anyone who has come into contact with this great champion. 2/2

Don’t think it’s helpful to offer opinions on serious allegations – particularly on social media – but that Juventus statement is abhorrent.

‘Allegations do not change our opinion that he is a great champion’ – this is bigger than sporting achievement, for goodness sake.

Moreover, Nike has said it is “deeply concerned by the disturbing allegations” facing Ronaldo. More on that via The Independent. They also have quotes from an EA SPORTS spokesperson after Ronaldo featured on the cover of the latest FIFA 19 release.