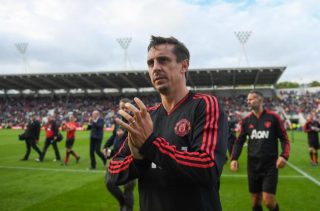 Gary Neville has named David de Gea and Luke Shaw as among the most impressive players in the Premier League this season.

This comes despite a slow start from the Reds, who have made their worst start to a campaign since 2013/14 under David Moyes.

Still, Neville is glad to see Shaw playing more often and impressing, while De Gea has consistently been one of United’s best players for years now.

“Luke Shaw at Manchester United, I’ve been really pleased for him,” said Neville.

“I’ve got full belief in him and his talent. He just needs that break in terms of staying clear of injuries.”

🔝 We asked @GNev2 who has impressed him most in the #PremierLeague…

Overall, however, the former United captain admitted the one player who’s really stood out for him is Liverpool’s centre-back Virgil van Dijk.

That’s perhaps less controversial given Liverpool’s start to the Premier League season, but it’s too early to say they will be title challengers. It looks like they will be there or thereabouts but you can have no guarantees.