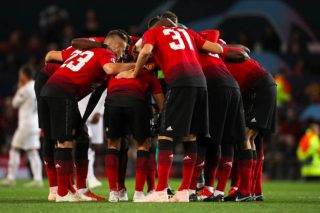 Marouane Fellaini has revealed the reason behind Manchester United’s team huddle before Tuesday night’s scoreless draw against Valencia in the UEFA Champions League.

The Belgian started for the Reds in a fourth consecutive game without a win. Going into the fixture at Old Trafford, United have drawn to Wolves and lost to Derby County and West Ham.

Chances were rare against Valencia and so one notable moment occurred was the team huddle by United prior to kick-off.

United very rarely form a huddle before games but Fellaini has explained what happened.

“Everybody [wanted to do it]. I think everybody is behind the manager,” Fellaini told the club’s official website, indicating it was a gesture of support for under-fire boss Jose Mourinho.

“We have to do our best and do our job. We showed it today but we have to do better [against Newcastle] on Saturday.

“Everyone is going in the same direction to try to improve and to do better. I think we wanted to show that we are together.”

A pre-match tradition, such as a huddle, is usually carried out by clubs such as Celtic — not United — so whoever’s idea it was on Tuesday night may need to give it a rethink on Saturday.

It won’t change our atrocious tactics, results or demeanour on the pitch. And the players are together already on that front.