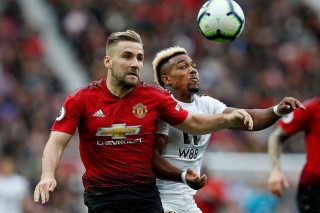 Luke Shaw has apologised to the fans again after a disappointing performance at Old Trafford.

Manchester United are on a winless run of four games after being held to a goalless draw by La Liga outfit Valencia in the Champions League on Tuesday night.

READ MORE: What Sir Alex Ferguson said about losing out on Hazard back in 2012?

The Reds haven’t won at Old Trafford since the opening day of the season against Leicester, having since lost against Tottenham and Derby County while drawing with Wolves.

There is just one more game before the next international break, which is when The Independent feel the United board will get to think about Mourinho’s position without noise in the background. Thus far Ed Woodward has given the impression he wants to delay a managerial change at Old Trafford.

However, Shaw believes United can bounce back when they host Newcastle at Old Trafford on Saturday evening.

“It’s always a better feeling going into an international break with a win, because if you go in without a win, it’s a long time before our next game when you can put things right. It’s frustrating if we don’t, but I’m sure we’ll bounce back.

“We keep saying that after every game and I’m sure it’s hard for the fans to take, but you don’t know what else you can say.

“They’ve had a hard couple of weeks, I’m sure, and we have too, as players. We’ll do our best to make it right on the weekend.“

Shaw shouldn’t have to explain anything. He is one of a few players putting a shift in and leaving his dignity intact, despite being challenging by Mourinho in a public manner a number of times.