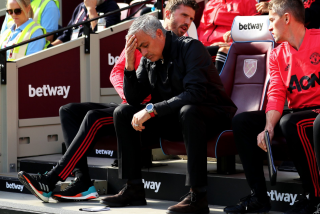 Jose Mourinho reportedly feels let down by senior officials at Manchester United after they failed to back him publicly against midfielder Paul Pogba.

The pair have been fighting since the season began, with Pogba questioning his manager’s tactics after the draw with Wolves while Mourinho removed the Frenchman of vice-captaincy duties.

Meanwhile, there has been no word internally or externally from the club, who we predict are going to defend the player because of his power commercially.

The Guardian report that Mourinho was expecting senior officials to make it clear to players that excessive player power would not win against the manager.

As a result, Mourinho now feels undermined and is currently concerned that the situation has been allowed to continue for too long.

Mourinho feels that United were wrong to make it fundamentally obvious to Pogba and his entourage that public comments going against the manager and the club would not be tolerated.

The Guardian suggest Mourinho wanted to see both private and public support from the United hierarchy.