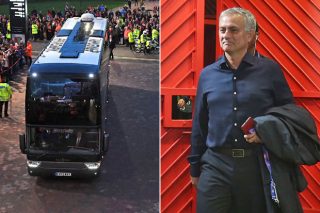 Greater Manchester Police have argued that Manchester United knew the situation well in advance and hinted they should have been better prepared.

Claims from Jose Mourinho that his side were denied a police escort prior to their Champions League group stage clash against Valencia have been rebuffed by the force, who are laying the blame with the club.

The Reds arrived at Old Trafford only 45 minutes prior to kick off of their encounter against the Spanish side, forcing them to delay kick-off by five minutes as a result.

Mourinho claimed that the embarrassing situation was due to Greater Manchester Police (GMP) refusing their request for an escort to the match.

“We left the hotel at 6 p.m. hoping that 30 minutes would be enough,” said Mourinho. “It usually is.

“But this time the police refused to do an escort, so we came by ourselves.

“From the Lowry Hotel we took 75 minutes.

“UEFA and the referee were nice to allow the match to start five minutes late.

“It was not a problem with club organisation. We were informed that the police refused an escort.”

However, Chief Inspector Andy Sutcliffe, GMP’s Silver Commander for the fixture, indicated that Mourinho’s version of events is not strictly true.

In a statement, he said, as per Goal: “All police deployments are carried out following a comprehensive risk assessment process and, specifically in respect of escort team buses, are only ever undertaken on occasions when there is intelligence or information to suggest a risk of threat or harm to the players.

“GMP has previously used police vehicles to accompany a team’s coach but after a review of our core policing responsibilities, it was decided that we would no longer provide this service at every fixture.

“We consulted with the relevant football clubs over a period of months to allow them adequate time to plan ahead for their journeys to the stadium.

“Every fixture is assessed individually and we will continue to work with all clubs to provide an appropriate policing response.”