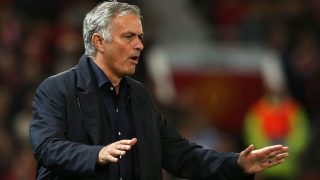 A scoreless draw had Jose Mourinho bemoaning the lack of quality in his side against a top-level team.

The manager questioned the “technical quality in his United team following Tuesday’s 0-0 draw with Valencia at Old Trafford.

United made it four games without a win across all competitions after another limp performance in their second Champions League match of the season.

Valencia were unduly troubled by United’s attack and could have taken all three points had they made the most of opportunities on the break.

Speaking to the media afterwards, Mourinho seemed to warn United fans not to expect much success from 2018-19 and claimed he could not be honest in his assessment for fear of further criticism of his methods.

“I think there are things that is difficult for me to say and if I say something funny, I’m leaving myself… it would be another reason to criticise me and I think you have enough.

“So, I prefer just to say that when last season we finished second and we finished runners-up in the FA Cup, we won our group in the Champions League. I thought it was a fantastic season. I knew why.”

Earlier, Mourinho appeared to suggest it would be difficult for United to improve upon their achievements of last season (?), when we finished SECOND in the Premier League to MANCHESTER CITY and FAILED to win a single trophy.

He told BT Sport: “I told in pre-season that last season was phenomenal. To finish second, reach the FA Cup final, win the group in the Champions League… I said it was a very, very good season and I don’t say more than that.”

Mourinho went on to question his players’ quality by claiming his side lack defenders capable of building attacks.

Why did he not try to improve Daley Blind as a defender rather than selling him back to Ajax? He may not be your top class centre-back, but he can play that position and is technically gifted enough to carry out that role.

I want a manager that will coach and improve players.

For months, Ed Woodward took the entire blame for not spending more millions to keep Mourinho happy. Perhaps he expects the manager to be getting more out of the players he has rather than pushing them to the side when he can’t be arsed?