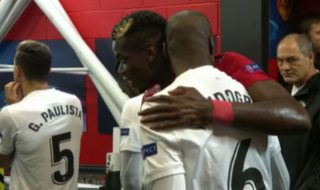 Paul Pogba’s actions before Manchester United’s draw with Valencia on Tuesday in the Champions League has caused quite a stir amongst these United fans.

It probably doesn’t help that United drew the match 0-0 at Old Trafford, as they failed to break down the La Liga outfit’s defence.

Pogba didn’t have the best of games, as he failed to drag United through the dirt and end their run of three straight games across all competitions without a win.

United now sit two points behind Juventus in Group H and with Mourinho’s side having to play the Old Lady twice before the end of the group stages, their chances of finishing top now look slim. Not that we expected to finish first anyway!

The incident that has United fans annoyed happened in the tunnel before the match. Pogba is seen acting rather pally with Valencia midfielder Geoffrey Kondogbia and is therefore accused of not taking the game seriously or staying focused.

That seems a little unfair. People want Gary Neville’s treatment of Peter Schmeichel every week, but that’s not going to happen. Pogba has a totally different personality and that shouldn’t affect his performances.

Anyhow, fans took to Twitter to vent their frustration at Pogba’s so-called antics before the match.

I can’t help it but Pogba has done my head in straight away. Laughing and joking with Kondogbia. Remember when @GNev2 wouldn’t even shake hands with Schmeichel ? #MUFC

Wonder what Roy Keanes thinking watching Pogba hugging laughing and kissing Kondogbia in the tunnel like that,zero intensity anymore,mates after final whistle fine but you should want to break your best mate in half before a match

Pogba and Kondogbia laughing around in the tunnel. And even as they walk out..
He clearly doesn’t help himself lol.
If he seriously cared about United, he wouldn’t do that.
Definitely wants to leave ASAP.

Pogba the twat hugging Kondogbia, who will probably dominate him all game, in the tunnel. Sooner he’s gone the better. He’d want to have a big game #mufc

Pogba and Martial are literally cuddling Kondogbia before kick off, can’t stand that. There’s plenty of time to do that after the match. 🤷🏻‍♂️

Pogba making me ill hugging kondogbia and that before the game. 2 mins in should be sending the cunt to the moon in a 50 50

Biggest game of the season so far and Pogba’s nearly shagging Kondogbia in the tunnel! Man would want to actually perform! #mufc

Pogba being so buddy-buddy with Kondogbia, even though they are friends, frustrates me at a time like this.

If it annoys you that Pogba has mates in football, get a grip!