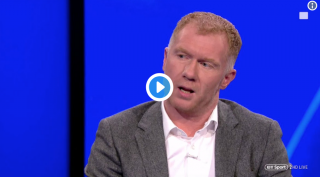 Scholes is a member of BT Sport’s punditry for tonight’s UEFA Champions League coverage, along with former United players Rio Ferdinand and Owen Hargreaves, who were all part of the 2008 squad that was successful in Europe.

Nobody can deny that pressure is building on Mourinho after a run of bad results following the 3-0 away win to Young Boys in the Champions League. A draw against Wolves in the Premier League, defeat in the League Cup against Derby County and then a 3-1 defeat versus West Ham has left question marks over his position at Old Trafford.

Scholes digs deeper by suggesting Mourinho’s mouth is out of control after publicly attacking his players and even members of the hierarchy for not getting what he wanted in the transfer market.

See the footage below:

“I’m surprised that he survived after Saturday”

“I think he’s embarrassing the club.”