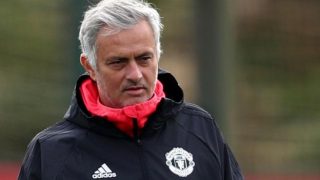 It is no secret that Manchester United manager Jose Mourinho is under intense pressure at the moment, but he has done the right thing by warning his under-performing players that the badge on the front of their shirts will always be more important than the name on the back.

United face Valencia in the Champions League on the back of a pressure-building 10 days that has put Old Trafford in the eye of the storm. Stretty News writers have had their say on the manager’s position, but hopefully, the players can respond tonight with a win.

From the draw against Wolves to the shock League Cup exit to Championship side Derby County, the Reds really need to get a run of wins together or the manager’s job will be untenable.

The manner of our performance against West Ham was as bad as the scoreline, leading Mourinho to stress his “golden rules” before Tuesday’s Group H match.

“All of my life, I have followed certain golden rules,” he wrote in the matchday programme.

“One of them is that a team can lose matches – that is just a part of football – but the team must never, ever lose its dignity.

“The team must fight, work, compete, win duels, be humble, and then at the end of the game every player must be exhausted because of the hard work they have given for the club, for the fans and for each other.

“Tonight, as we welcome Marcelino, the Valencia players and their supporters to Old Trafford, we have to follow these golden rules.”

Jose Mourinho’s notes in the #MUFC programme. “All of my life, I have followed certain golden rules. One of them is that a team can lose matches – that is just a part of football – but the team must never, ever lose its dignity” pic.twitter.com/AM8j6OwzsI