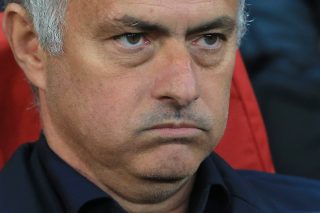 Another underwhelming display saw Manchester United’s run without a win grow to four games after a scoreless draw with Valencia in the UEFA Champions League.

Four points from two games in the Champions League may shine a brighter light on that record, but pressure is building on manager Jose Mourinho to save his job.

READ MORE: Scholes suggests Mourinho’s mouth is out of control and is ’embarrassing’ Man Utd

How United can go from a promising opening 10-15 minutes to an overall dull performance has angered sections of the fanbase tonight.

United look like they lack any real instruction apart from sitting back and doing their utmost not to lose games, but that’s never going to entertain fans and the sooner Mourinho realises that the better.

This is how United fans reacted to the scoreless draw with Valencia on Twitter:

Tonight, Manchester United have tried. They just have absolutely no idea.

Manchester United fail to win for the fourth game in a row. pic.twitter.com/v3c6cmN2so

And it’s all over.. pic.twitter.com/J4mHt3vOAB

Matic, Fellaini and Pogba gave the ball away far too easily and far too often

Once again… Not. Good. Enough.#MUNVAL

Dunno why Jose is smiling, United are utterly fucking hopeless. Watching that was like being at the dentist.

An improvement from West Ham – couldn't have had a lower bar, and we started well and had endeavour but we showed we're out of confidence and form. Too slow moving the ball, real problems when two 'star' players like Sanchez and Lukaku so out of form. Shaw and Bailly positives.