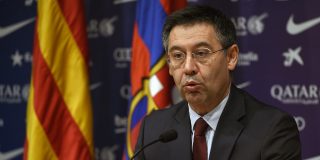 Paul Pogba has been linked with Barcelona following his feud with Manchester United manager Jose Mourinho.

And in a recent interview with The Times, Barcelona chief Josep Maria Bartomeu has refused to rule out a move for Pogba. (He also opens up about Lionel Messi’s contract situation)

READ MORE: Mourinho warns Pogba ‘nobody is bigger than the club’

The United midfielder has been linked with the La Liga giants with his Old Trafford future up in the air following constant arguments with Mourinho. Their relationship is near beyond repair.

Barca are said to be interested in Pogba but are not prepared to go above £100 million, as per The Mirror, with the Reds reportedly looking for close to double that!

Reports in the summer suggested United rejected an offer from Barca and Bartomeu has hinted he may have spoken about a potential deal.

Asked about a potential January bid, Bartomeu told The Times: “I read these rumours – not just Pogba but a lot of players. Most of the teams don’t want to sell their players. They want to grow.

“When you hear from agents that a certain player is on the market – and I am not saying that about this player, but generally – I will sometimes call the CEO and say ‘Is it true you want to sell this player?’. Usually they say ‘No way, not for sale’ and that’s the end of it.”